I've been posting alot that what people think or value affects how they take up and act on information, particularly information on uncertainty. I have not dug into the literature on this myself. However, some colleagues from the Public Policy Center, including IGERT fellow Joe Hamm, have a paper "Public Participation, Procedural Fairness, and Evaluations of Local Governance: The Moderating Role of Uncertainty" in the Journal of Public Administration Research and Theory that is very interesting for a couple of reasons.
First, they conclude that the effect of perceived fairness on the overall evaluation of a government is affected by uncertainty. This figure is the best example: 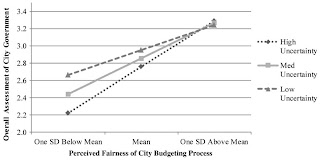 If one is uncertain about the government and how it operates, your perceived degree of fairness has a bigger impact on whether you think the government is doing a good job, although fairness always matters. Most importantly, if you perceive the process as fair, then uncertainty DOES NOT affect the evaluation of the process. So, paying attention to making environmental decisions appear fair could reduce the impact of uncertainty on stakeholder perceptions of the outcomes. However, see the second reason it is interesting ...
The second thing that is interesting about their paper is that they spend some time defining uncertainty and working out how to measure it. They claim that: "...most work in political science has instead relied upon objective measures of uncertainty whereby the certainty of an individual is measured by the accuracy or objective correctness of a response.", and then go on to use individuals responses on two fact based questions as a measure of uncertainty. So this is quite a limiting definition of uncertainty, as a lack of factual knowledge about something, or in their particular case, factual knowledge about the organisation providing the outcomes. I guess this is a very specific subset of epistemic uncertainty, in my preferred lingo.
In the case of the Missouri River, this would be akin to asking people about the inner workings of the USACE, and that having an effect on whether stakeholders perception of the job they are doing on managing the Missouri River is good or not. That's not quite the same thing as I'm interested in - what does uncertainty about the future state of tern and plover populations do to people's perceptions of the job the USACE is doing.
They review some other definitions of uncertainty, none of which really match up with what I think of as either epistemic or aleatory uncertainty. So, pretty clear that the state of the science on uncertainty is uncertain about uncertainty.
Posted by Unknown at 6:00 AM